What is Audio Layout or Audio Channel Layout?

The Audio Channel Layout, or simply Audio Layout, refers to the details of the content of each audio channel, and the nature of sound reproduction or the way sound is played out. The two most common used Channel Layouts are mono and stereo, but also surround sound flavours and customised configurations are possible. Using Limecraft, you can qualify the different audio channels according to the nature or the language of the audio, loudness, codec, etc.

Where can I find information about the Audio Channel Layout in Limecraft Flow? 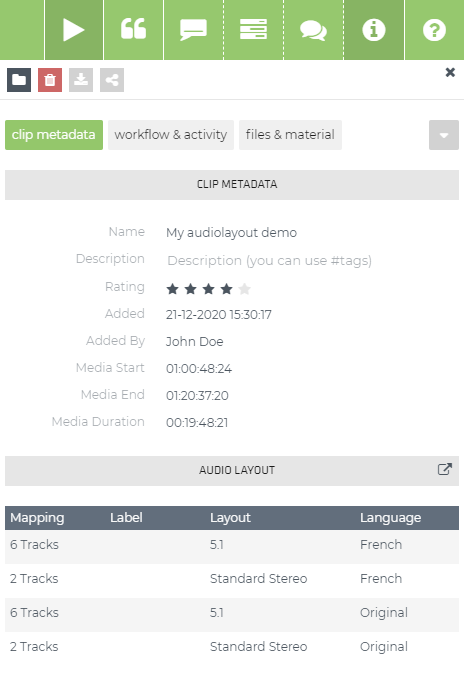 When hovering the mouse over a row, Flow will show in detail which audio channels constitute this channel layout:

So we store explicitly which particular channel is the left channel of the 5.1 French channel layout, which is the center channel, etc.

In addition, a channel layout can contain descriptive metadata. The following fields can be set on a channel layout. This is a fixed list of fields and not configurable.

B
Björn is the author of this solution article.

Did you find it helpful? Yes No

Send feedback
Sorry we couldn't be helpful. Help us improve this article with your feedback.